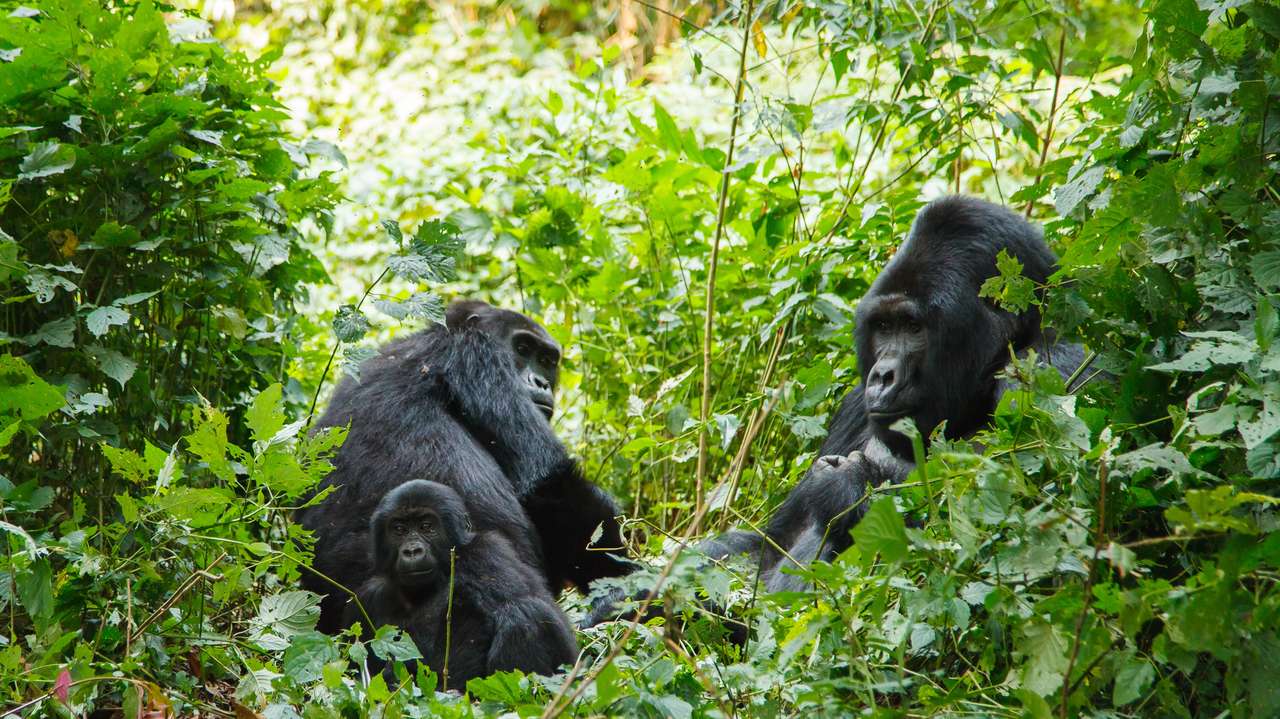 Buhoma sector is popular as one of the busiest sectors of Bwindi Impenetrable Forest National Park not only in terms of tourist activities that tourists choose to participate in but also its most outstanding accommodation facilities that visitors can spend a night after that strenuous adventure in the jungle. Buhoma sector was the first sector of Bwindi Impenetrable Forest to be opened for gorilla tourism. It has three Habituated Gorilla Groups that are available every day for visitors to track the critically endangered mountain gorillas. They include;

Mubare gorilla group is popular as M. Group. It is the oldest habituated gorilla family to be habituated in 1998. Initially, it had 12 mountain gorillas but when their silverback gorilla-Ruhondeza passed on, there were only 5 members that were left in the group. In 2013, 4 more individuals also joined the Mubare gorilla group and this increased the number to 9. The ease to trek M. Group keeps changing, usually gorillas used to come closer to the Buhoma park headquarters but in normal treks, tourists can spend more than five hours to trek this gorilla family. At a time when this group had 6 and 5 individuals especially after the death of their leader Ruhondeza, even the tour operators and tourists rarely tracked gorillas in this group but today, things have changed because of the increased population that has reached 9 members as result of the new strong leadership from the new silverback who is heading their family. Mubare denotes the place where the gorilla family was first discovered in Bwindi Impenetrable Forest National Park. It derived its name from the magnificent Mubare Hills.

Habinyanja gorilla group was habituated in 1997 and was first tracked by visitors in 1999. It derived its name from “Nyanja” meaning “body of water.” This also denotes to a swamp in Bwindi Impenetrable Forest National Park where the gorilla family was initially sighted. It is composed of 18 gorillas and 2 silverbacks. It began with a large number of gorillas but due to fights, the group kept on breaking away to form Rushegura gorilla family. It is not strange for bigger gorilla groups to break away to form new groups as others join especially those that are being dismissed by their family members for instance the solitary gorillas and in most cases, they maintain the brotherhood which is a case with Habinyanja gorilla group and Rushegura that cross each other from time and again and live harmoniously. For tourists who wish to track this gorilla group, the hike can take nearly 3 to 8 hours and it is advisable that visitors spend a night in one of the lodges around Buhoma sector of Bwindi Impenetrable Forest National Park.

Ruhija sector is comprised of 3 gorilla families one of which is set for research purposes but it is also used by tourists.

Oruzogo group is one of the newly created gorilla groups in Bwindi Impenetrable Forest National Park. This group received its first tourists in 2011. It is composed of 23 gorilla members. Oruzogo gorilla group is not only famous for its largest size but also its most playful juveniles and toddlers that do not leave visitors bored. Visitors who are interested in tracking this gorilla group can spend a night around Ruhija sector in any of budget or luxury lodges so that they can spend about one hour to catch up with the early morning briefing. This gorilla group is headed by Tibirikwata.

Kyaguriro gorilla group also known as A and B group

The Kyaguriro gorilla family was habituated in 1995 and it was set for research purposes by the German Max Planck Institute of Evolutionary Anthropology. For conservationists and researchers, Kyaguriro group can be the best place for you to discover the reality about world’s most critically endangered Apes. Kyaguriro gorilla family had severe tragedy when Rukina silverback was hit by lightening on 7th April 2015. After his death, the family was headed by inexperienced young silverback “Mukiza” that was later ambushed by an immigrating adult silverback “Rukara” from the Bitukura group some thing that caused the split of the group into 2-Kyaguriro A (Rukara) and Kyaguriro B (Mukiza) in May 2016. The A and B gorilla families comprises of Rukara which consists of 10 gorillas, one silverback, 2 black backs,  3 adult females, two juveniles and two infants and the second family is composed of 10 members and they include one silverback, four adult female gorillas, 4 infants and one sub adult.

Rushaga is the best sector of Bwindi Impenetrable Forest and it is the only sector where visitors can do Gorilla Habituation Experience. Its habituated gorilla groups include the following;

This group is comprised of 7 individuals and one silverback gorilla. Silverback Mishaya left Nshongi gorilla family in July, 2010 with some female gorillas and this led to formation of Mishaya gorilla group. He is popular as real fighter gorilla who managed to grab many females from other non habituated gorilla families in the sector and the total of mountain gorillas reached 12 with 3 infants. Mishaya is the only adult gorilla in the family and it is famous for as a fighter who usually begins interactions with other gorilla groups.

Nshongi was once the biggest gorilla family that comprised of over 36 gorillas. It was officially established in September 2009 and derived its name from River Nshongi. Whereas several gorilla groups often comprise of 25 gorillas with 1 or 2 silverbacks, Nshongi was one of the strange groups to be with 4 silverbacks. Besides, this gorilla family is headed by Nshongi who is not even the oldest silverback in the group and amazingly all the 3 silverbacks and 7 black backs stayed peacefully with one another  without any attempt to fight for leadership. In July 2010, the gorilla family broke off and remained with 26 individuals while the recent splitter group formed Mishaya gorilla family. In 2013, the gorilla group further broke off and decreased up to 18 members with the new split creating the recent Bweza gorilla family with 10 individuals.

This group is composed of more than 13 individuals and 3 silverback gorillas that are the only ones named. The dominate silverback gorilla is known as Rumansi plus the other 2 old male gorillas called Rwigi and Ruhamuka. Kahungye group was opened for tourists and gorilla tourism in 2011 but within months, the group broke off forming the new Busingye gorilla group. Before splitting, the gorilla group was composed of 27 gorillas with 3 silverbacks.

Busingye family broke off from Kahungye group in June 2012. It was Busingye silverback who decided to break away and form his own group. Busingye is means “peace” something unique given the fact that this ambitious silverback is popular for his legendary fights with other gorilla families. This silverback enjoys exposing his power and whenever he meets a wild group he mercilessly takes the female gorillas to add to his group. In January 2014, the gorilla family had 9 individuals with 3 infants, 2 adult female gorillas and other young teens. Busingye is headed by one silverback.

Bweza gorilla group is comprised of 7 individuals and 1 silverback. It was initially on Nshongi gorilla family that used to be the biggest ever habituated group in Bwindi Impenetrable Forest National Park. However, as result of the July 2010 silverback Mishaya decision to leave the family and begin his own group, he broke away with a good population including the silverback Bweza. At the end of 2012, Bweza decided to live an independent life; he simply walked away with almost six individuals from the Mishaya gorilla family. Its creation therefore increased the number of gorilla groups and this means more opportunities are now available for tourists to achieve their long time dreams in the misty jungles of Bwindi Impenetrable Forest National Park.

If you are interested in the most strenuous gorilla adventures in Uganda, then visit gorilla group in Nkuringo sector. Tracking mountain gorillas in this sector is a bit challenging but also rewards visitors who get into it was the most captivating and memorable experiences that come once in a life time. It has only one habituated gorilla group;

The word Nkuringo means “round hill” which denotes the hill where the gorilla family was first sighted. This group consists of about 19 mountain gorillas and it is the loveliest group for tourists who get into Bwindi Impenetrable Forest National Park for gorilla trekking. The strenuous terrains should not be the main issue because a 94 year old woman also achieved her long time dreams in 2013. Besides its rewarding terrains, the group also comes with the most stunning scenic views of Nkuringo sector and once you get into this group, you will certainly appreciate it.

For Gorilla Habituation Experience, there are only 2 (Bushaho and Bikingi) gorilla families that have been set for visitors in Rushaga sector of Bwindi Impenetrable Forest National Park. Unlike the normal treks where tourists enjoy only one hour with the mountain gorillas, gorilla habituation experience offers visitors with 4 hours of face to face interaction with gorillas in the wild. The 2 groups are still undergoing habituation that this means tourists get the best of ultimate experiences with these charismatic creatures in the wild. The gorilla permits for this experience cost $1500 per visitor (foreign non resident), $1000 for foreign residents and shs.750000 for East African residents.

In conclusion, Bwindi Impenetrable Forest National Park is the best gorilla trekking tour destination in Uganda. The park consists of various gorilla groups but only 11 are set for gorilla trekking within the four gorilla sectors. Gorilla groups range from fully habituated groups (Mubare group, Habinyanja, Rushegura, Bitukura, Oruzogo, Bweza group, Nkuringo group, among others) to semi habituated groups Bushaho and Bikingi gorilla groups). Each gorilla group rewards travelers with unique experiences since they all have different stories to tell the world.

Going on Safari in Uganda