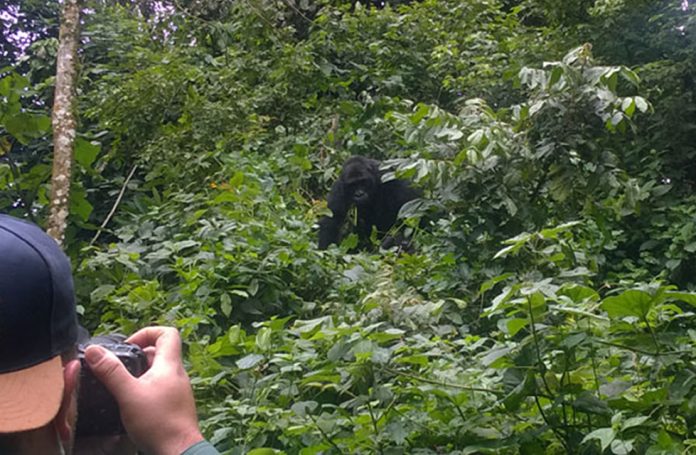 Have you watched the planet of Apes or the King Kong Movie? After watching some movies you may think that gorillas are violent creatures! Gorillas are not violent and are worthy visitinng in the tropical rain forests of Uganda, Rwanda and the DR Congo. Gorillas are the dominant primates that fall in ape species. Gorillas are found in ten countries in Africa. They are found in Uganda, Rwanda, Democratic Republic of Congo (DRC), Central African Republic, Congo Brazzaville among others.

Mountain gorilla tourism is one of the most developed forms of tourism. The major trekking destinations include;Bwindi Impenetrable National park and Mgahinga National Park in South Western Uganda, Virunga National Park in the Democratic Republic of Congo and the Volcanoes National park in Northern Rwanda. Other parks where you can see other species of gorillas while on safari are;

Gorillas are believed to be violent but they are not! They can be violent only when disturbed or when they suspect that there is an enemy. Hardly do gorillas initiate fights but can defend themselves against danger. Within the national parks of the Virunga, gorillas have killed poachers who always come in their natural habitats to smuggle some of the wildlife within the park. Gorillas move in groups which are led by mature male called silver back.  They are humble but become violent when attacked.

Gorillas trekking is known to be the major tourist activity in any country where Gorillas are found. Gorillas earn a lot of foreign exchange – in Rwanda, the Gorilla permit cost US$ 1500, Uganda at US$ 600 among others.

Meeting Gorillas in their natural habitat is a life time which everyone should enjoy before death.  That is why the number of visitors moving for gorilla safaris increase every day amidst high trekking cost/ expensive Gorilla permits, Air tickets, visas and accommodation costs among others.

Looking into the eyes of the endangered mountain gorillas is memorable. Meeting gorillas in their natural environment enable trekkers to take photos and films up close. Such photos can be uploaded on websites, bill boards and so on hence promoting business.

Gorillas themselves are entertaining or dramatic to amuse trekkers. Gorillas are found jumping from one tree to another to entertain visitors.

Gorillas are intelligent and are capable of using tools like sticks, stones and so on in their routine work. They can slow stones to the enemy, can use sticks to get fruits from trees, they can also build nests to sleep in.

They nurture their young ones just like human beings. The young ones are trained how to jump, climb, hunt, feed, run and so on. They do it to prepare them face future challenges.

Gorillas are among the rare primates which are found in few countries on African continent. They are unique and visiting them is a life time event which every human being should do before going for eternal life.

Gorillas stay in the wild and they stay in groups for security reasons and they fight in groups. Gorillas do not what anybody to challenge them so; trekkers are advised to remain humble when they visit the gentle giants.

Gorillas also communicate amongst themselves and they use different communication sounds in different circumstances. When attacked they make different sound from that when they land on the plenty sources of food.

Gorillas are treasured to extent of being treated by expert primatologist doctors -well known internationally. That testifies why Gorillas are worth visit!

One Week In Uganda : 7 Days Self Drive Itinerary